“Fjord” is one of the few Norwegian words that have become international. Our fjords offer breathtaking scenery and tourists are traveling from all over the world to experience their beauty. The scenery hidden beneath the surface can in some fjords paint a completely opposite picture.

One of the biggest Illmenite ore deposits in the world can be found in Hauge i Dalane at the southwest coast of Norway. The mineral is the main source of titanium dioxide which is used as a base pigment in paint, paper and plastics. It can also be transferred into titanium which is a light weight, high strength and not corrosive construction material.

To extract the Illmenite, the ore must be crushed into micro particles. Only a small percentage is extracted. The remaining waste must be deposited. From 1960 until 1984, the mining company Titania deposited 2,5 million tons of mine tailings in Jøssingfjord every year. After 24 years, the water depth was significantly reduced and the discharge line had to be extended to outside the fjord. From 1984, the mine tailings were released at a depth of 170 meters at Dyngadjupet. It was early reported that the mine tailings spread over a much larger area than expected. The fine particles strangled the ocean floor and made it un-inhabitable. The pressure from environmental activists increased. In 1987 a young activist named Fredric Hauge and three others invaded the office of the environmental minister Sissel Rønbeck and demanded that the release from Titania should stop.

The activists eventually won the battle and Titania had to construct a massive land deposit. It was ready in 1994 and the release to sea finally stopped. 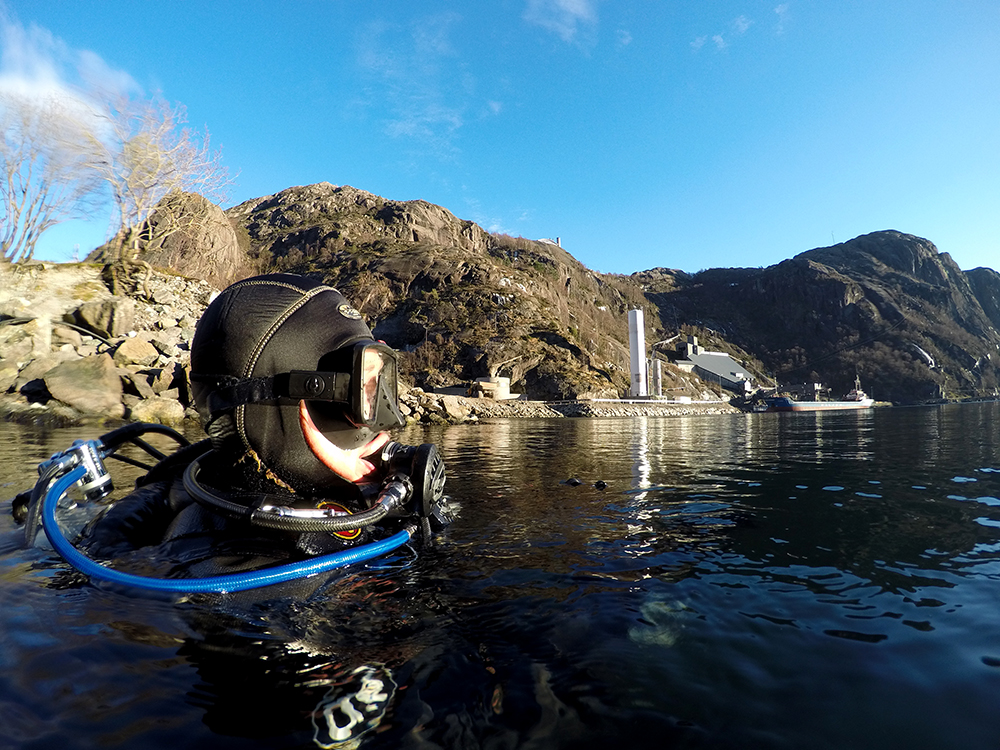 A beautiful day above the surface, but a horrible sight below.

Diving in Jøssingfjord 33 years after the release stopped

A horrible sight met us when we dived Jøssingfjord earlier this winter. The fjord was a desert where only a few of the most resilient species lived. Only the robust starfish and edible crab (Taskekrabbe) could be spotted. The release inside the fjord stopped 33 years ago, but it felt like it only stopped a few days earlier. Some scientists have claimed that a normal fauna has been established on the locations where the mine tailings were deposited. We cannot understand how this conclusion can be made. They are for sure not divers, and cannot have witnessed the desert landscape we swam through. According to The Guardian, the Norwegian minister of climate and environment, Vidar Helgesen, have stated that it only takes between 5 and 10 years for the marine fauna on the sea floor to rejuvenate.

«Those that fail to learn from history, are doomed to repeat it» (Winston Churchill)

Technology have improved and we have gained more knowledge since the Jøssingfjord disaster. Despite the approval, the institute of marine research (Havforskningsinstituttet) are critical to both these projects. The knowledge of the different biological processes and water currents within the fjord ecosystem is not sufficient to conclude that the mine tailings will not affect a larger area of the fjords. There is a risk that the micro particles will spread into the entire fjord as was the case in Jøssingfjord. This may affect the spawning grounds of several species. Both fjords are in addition national protected salmon fjords, and essential for the wild Atlantic salmon.

The fine particles have strangled the sea floor

World Heritage only above water?

Jøssingfjord will most likely never recover from the many years with the Titania release. The fjords are our world heritage. Are we worthy this responsibility when we choose to take the risk of destroying complete marine ecosystems?